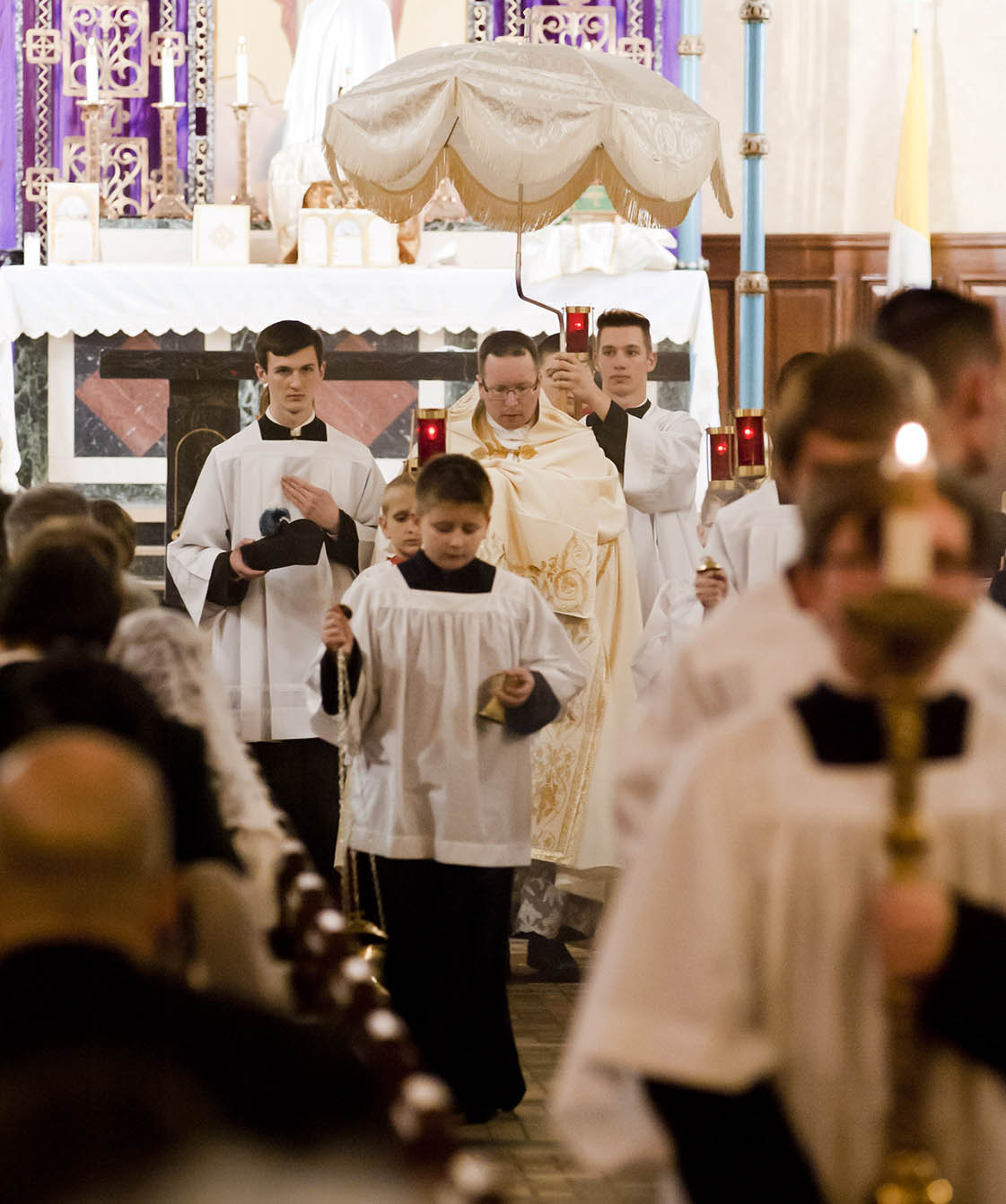 This year, St. John XXIII Parish was privileged to celebrate the “pre-1955” liturgies of Holy Week according to the 1570 Roman Missal. These ceremonies are steeped in tradition, and are quite literally centuries old! Diligently led by Canon William Avis (pastor) and Canon John O’Connor (parochial vicar) from the Institute of Christ the King, the beauty and richness of these ancient liturgies fostered wonder, solemnity, reverence, and humility for a very grateful congregation of young and old Catholics alike.

For some historical background, the vast majority of Traditional Latin Masses (also known as the Extraordinary Form) celebrated across the world today are done so according to the Roman Missal of 1962. The 1962 Missal contains the “reformed” Holy Week liturgies, which were established in 1955. By special permission of the Ecclesia Dei commission, the Institute of Christ the King has been allowed to celebrate the liturgies prescribed by the Missal that preceded the 1955 update: which was established in 1570, by order of Pope Pius V after the Council of Trent, which essentially was the Catholic Church’s response to the Protestant Reformation.

One of the exceptional differences in the liturgies of Holy Week was the “Door Knocking” ceremony of Palm Sunday, in which the procession of palms culminated outside the door of the church. An antiphon and verses were sung by two scholas–one inside the church, the other outside–creating a moving aesthetic of the crowds singing Jesus’ praises within the walls of the city of Jerusalem. Once the verses were complete, the foot of the crucifix was knocked on the doors of the church, flinging them open, as a powerful image of Jesus’ triumphant entry into the city. Vespers were recited by the clergy after Maundy Thursday and Good Friday Masses, and the public communion was notably absent for Friday’s Mass of the Pre-Sanctified; this tradition honors the Church’s mourning of Christ, when He was separated from the living when laid in the tomb.

On Holy Saturday, the Easter Vigil Mass was held at Risen Lord Church, and proved to be well worth the outstanding efforts of the clergy, servers, and musicians. Twelve prophecies were chanted (rather than the four of the 1955 reform), which revealed the story of God’s divine plan for the salvation of humanity–from the narrative of creation, to Noah and the flood, to Abraham’s sacrifice, through the Exodus of Moses and the Hebrews from Egypt, Ezekiel’s prophecies, Jonah and the Ninevites, and finally ending with the defiance of the three Hebrews against King Nebuchadnezzar. The prophecies were chanted by the clergy, with assistance from members of the schola, and even some of the altar servers!

Please see the following gallery, for a better look at some of the beautiful ceremonies of the week. Special thanks to Mr. Bill Redic for the photography. And many thanks, again, to Canon Avis, Canon O’Connor, and to all of the ministers, servers, and musicians, for making this Holy Week an extraordinary reminder of the richness of our tradition in the Catholic Church.